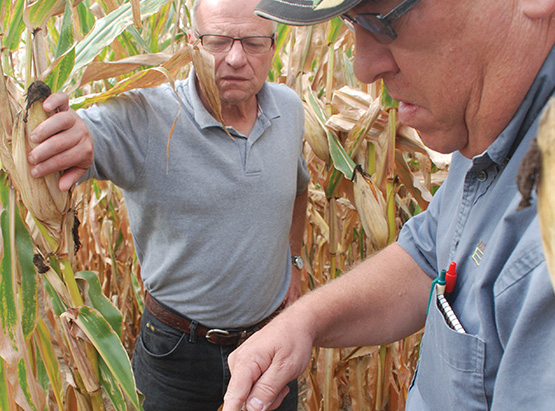 A New Jersey native — with no farmers in his family tree — is now a successful beef breeder and cash cropper in Minnesota’s Winona County, southeast of Minneapolis. Tom Scarponcini came to his beautiful Rushford-area farm by way of Maine, where he started a small enterprise pasturing 16 head of cattle and learning about rotational grazing. “I wanted to be a farmer, but I have no idea where that came from,” he says.

After getting a taste of farming in Maine, Scarponcini wanted to expand his operation but it was nearly impossible in that area. “You end up paying house-lot prices for new land, but then I stumbled on this place,” he says. “This place,” which includes the highest spot in the county, comprises 870 total acres; 330 acres are used for crop production. He fell in love with the rolling, sloping hillsides and could envision it as a place to expand his beef herd.

“This is a beautiful farm for raising cattle,” says Scarponcini. At the start, it was kind of run down. “It was a diamond in the rough, which made it affordable. But you just looked at the depth of the black dirt and you knew there was potential there.”

For the first few years after purchasing his farm, Scarponcini rented out the farmland while he concentrated on building 32 miles of fence and installing 13 miles of water line so he could set the land up for rotational grazing. He also moonlighted as a pharmacist on the second shift at the Mayo Clinic, which helped with the setup of his Brandywine Farm.

About 20 years ago, Scarponcini visited Midwestern BioAg’s booth at the Rochester farm show and met with Gary Zimmer, the company’s founder. Having earned his pharmacy license, Scarponcini had a very strong background in chemistry and biology. He also obtained a master’s in microbiology and had a good grasp on the science as he read the promotional materials from BioAg. “I knew very little about agriculture at the time, but the science — the biology, chemistry, and microbiology — all made sense. In theory it sounded right and I thought it was worth a try. It’s not organic; it’s biological,” he said.

Two years after landing at his Minnesota farm, Scarponcini took over the management of his crop acres and began a long relationship with BioAg consultant Mike Lovlien. Twenty years later, he is getting silage corn with 204-bushel-per-acre yields, his plants are 13 feet tall, and the stalks are thick and green. When Scarponcini and Lovlien analyze root systems, soil, and earthworm holes, they find “it’s cooking,” Scarponcini says.

Lovlien notes that they avoid applying harsh inputs that can restrict soil life. “We’re not out there harming soil health. Tom has fully embraced our program. In 2013, we grid-sampled every 2½ acres on his land,” he said.

Another factor his crop acres benefit from is the cattle that are a part of Scarponcini’s operation. Along with dedicated cropland, he has 350 acres of permanent pasture on which graze 250 cow-calf units — some registered Gelbvieh and some that are Balancer breed — a registered hybrid between Angus and Gelbvieh. These hybrids, he explains, gain carcass traits and a black hide from the Angus side, while getting their mothering ability from the Gelbvieh. Of the 250 cows that calved this spring, all but two were born on his farm. “They were raised here and adapted to this environment and management program.”

The cattle have been more than helpful in balancing the cash flow of the farm and providing manure that enriches the land. During calving season, manure is stockpiled from cattle yards at the farmstead and is used selectively on the fields. Scarponcini and Lovlien manage his land, but he leaves the crop planting and harvesting to custom operators who have recently put up huge piles of corn silage at the farm.

“I have to hand it to Tom,” says Lovlien. “He manages the two enterprises to support each other. He sold cattle to help pay for soil improvements in 2013 and he will recoup that for years to come.”

One of the things that drew this farmer to BioAg is that the company emphasizes the importance of micronutrients as well as calcium and sulfur. “No one else ever acknowledged that they were even significant. Their significance was obvious to me with my science background. If a micronutrient is a catalyst for a larger process, then when it’s gone, that process stops. Of course it’s important,” Scarponcini adds.

“If a micronutrient is a catalyst for a larger process, then when it’s gone, that process stops. Of course it’s important,” Scarponcini adds.

He went into the BioAg program on its claims, and was won over by the tangible results — tonnage, evidence of earthworm activity, and nodules on the roots. Tissue analyses of his haylage showed that his crops stood at the highest test levels in every category. “That really impressed me.”

Some of his crops are “too rich” for his beef cows and must be diluted with corn stalks or lower-quality hay. His corn production this year is 12 bushels ahead of where it was last year. “I’ve achieved a level of production that I’m comfortable with,” said Scarponcini. “All indications are that it is working.”

Scarponcini has been active in the cattle business since he started his enterprise. His cattle leave the farm as breeding bulls and replacement heifers for other breeders. He helped start a cooperative marketing group 13 years ago with breeders in Missouri, Nevada, and Colorado called Seedstock Plus with a strong commitment to commercial producers.

All their bulls are tested for feed efficiency and DNA tested for the gene markers that are associated with tenderness of their beef. “There’s no reason in the world for anyone to ever have a tough steak. Genomics has identified the genes for tenderness. We have the tools.”

The Balancer breed’s development — in which Scarponcini was instrumental — draws on hybrid vigor by crossing the two breeds and pulls the best qualities from each breed. Two-thirds of his own herd is purebred Gelbvieh, which are red, and one-third is Balancer.

Scarponcini says it took him almost 20 years to get his place “up and running,” but his goal was always to get the farm in reasonable condition so he could retire from his pharmacy job, which he did in March 2013, a few years ahead of schedule. BioAg’s program was a big part of bringing his farm back to life.

“I strongly believe that I have a moral and ethical obligation to leave the farm, as a whole, in better condition than I found it,” Scarponcini said. “It transcends being a job to being a way of life.”